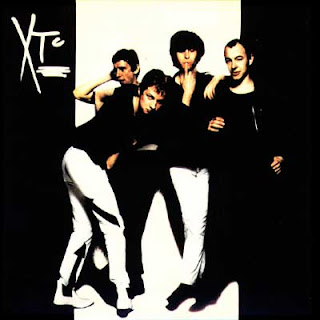 Ever OD'd on helium?  Well, I wouldn't recommend more than a couple of huffs of hippie crack to anyone (you can actually feel your brain cells being slaughtered as you inhale), and I doubt these guys were puffing laughing gas, either, but damn, they had to be on something.  Nitrous sulfate, perhaps?  Benzedrine?  Caffeine pills?  Mexican jumping beans?  This album is "hyperactive".  I put that in quotes because while many albums are, indeed, hyperactive, this sucker is the poster boy for Ritalin.  Not for nothing do they have a song called "Spinning Top" which is as dizzy and frenetic as its title (and, frankly, just as much fun for those over the age 6).  Luckily, there's plenty of solid tunesmanship beneath the herky-jerky arrangements and tempos splashed with Jolt cola.  Hooks catchy galore!  "This is POP!" as they so proudly declare (they are not, however, as they also declare, a "Dance Band", unless you're at a charity gala for spastics.)  XTC were one of the first bands to truly earn the New Wave moniker - this definitely wasn't punk, much too aggression-free and relying on bouncy rhythms and cheesy keyboards for that; but it wasn't trad pub rock, either, it was much much too energetic and just plain weird.  At times (what do you mean, "at times"?  Practically all the freakin' time) XTC try too hard to put their tunes across as quirkily as possible.  Or maybe it's the other way round - they're naturally oddballs who are trying their darnedest to write and perform conventional Beatlesque power-pop.  Whatever the case may be, I find that after I rustled the ping-pongs out of my head, I catch myself humming the choruses of "Statue of Liberty" and "Into the Atom Age" at odd moments during the day, they're just that CATCHY.   Not that all of the album is up to that caliber; several songs come across as not much more than dinky little novelty tunes, and though the gross deconstructionism of Dylan's "All Along the Watch Tower" is the only truly awful song (albeit a six-minute long mistake, three times the average song length of the rest), I won't lie to you and say that by the end of all this herking and jerking and Pac-Man Ponging in my head, I'm not more than a little exhausted and annoyed.   It doesn't help that the length is padded out with six bonus tracks, apparently from a pre-album EP release, that are stuck RIGHT IN THE MIDDLE of the original album.  Not that you can really tell which are the bonus tracks and which are the original album tracks; the non-LP tracks are slightly more conventional and slightly less catchy, but not enough so's you could tell a blindfold difference.

P.S.  "I'm Bugged" is a total ripoff of Wire's "I Am the Fly", but not quite as naggingly annoying (which in this case, makes it weaker than the Wire tune).