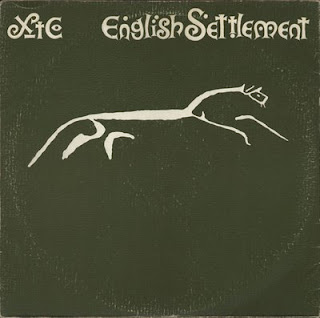 English Settlement (1982) ****﻿
A fifteen-track double LP crammed onto one CD, it doesn't have more songs than any of the other heavily bonus-tracked CDs (there wasn't any room for additional b-sides to add to the original album this time), but it feels a lot longer.  The reason is that the song lengths are up to an average of four to five minutes, and quite a few of them feel stretched out unnecessarily; these quirky little pop songs really don't need to go on as long as they do.  Another reason is that the songs, on the whole, aren't as immediately accessible as on previous efforts.  It gets off on the wrong foot by starting with Moulding's gloomy "Runaways," which eventually grows on you once you discern its carefully concealed melody, but any XTC album that begins with a hook so buried it takes repeated listens is, as you can guess, going to be the definition of a grower.  It's easier on the ears than the garishly pounding early albums, but on initial impression, also more boring.  But hang in there, the hooks eventually assert themselves, and some are even obvious: "Senses Working Overtime," possesses one of those 1-2-3-4-5! choruses that once heard is never forgotten.  "No Thugs in Our House," also possesses such a memorable, booming chorus, though in other respects it's an inferior song to "Senses Working Overtime".  The lyrics are on the whole somewhat more abstract and metaphorical than the mostly straightforward politicisms of Black Sea, though the message of "Melt the Guns" hardly leaves anything to the imagination, nor does the anti-work slacker's anthem "Leisure".  Musically there's more branching out into previously unexplored eclectic shores:  a bit of Spanish guitar tapdancing, some barrelhouse piano, even a straight-up synth-pop number, "Fly on the Wall," which is one of the few immediately catchy tunes.  The band's New Wave roots are fastly sailing adieu, never to return, but it's not quite mainstream guitar pop yet; XTC are still much too quirky for that.  The rough edges are slowly but inevitably being sanded away, however.   The album closes with a bitterly heartfelt plea of sexual frustration, "Snowman," a bit of a recurring theme in Partridge's lyrics.   Well, if I looked like an Andy Partridge in a pear tree, I'd sing those blues, too. And it's true as he surmises in "Down in the Cockpit" (a double entendre, naughty schoolboy?) that women rule the world by pretending to be the weaker sex.