The Strokes - Is This It 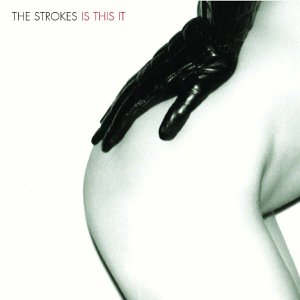 Hype vs. anti-hype: the Strokes were neither rock'n'roll messiahs nor phony-alt.rock corporate garbage, but simply a very good, exciting little garage band.  And I do mean little, as these tinny, compressed tunes are miniaturist in scale and ambition, as if they're intentionally slight.  But hey, guess what, they're goshdarn FUN and CATCHY IN ALL CAPS, at a time when this sort of catchy guitar-pop was all but absent from the rock scene.  They're doing absolutely nothing any random skinny-tie act was Knacking out in 1979, but who else sounded like this in 2001?  Bringing absolutely zero originality to the table, only a teenager unfamiliar with the history of rock music could possibly get excited about this collection of second-hand strokes and steals from Wire, Iggy Pop, the VU (yes, the bicycle-chains-snapping-guitars sound pretty VU-ish), and Tom Petty ("Someday"), but those kids formed bands, and the Strokes helped inspire the New Garage Revival that by no means ruled the airwaves but did give us some pretty decent rock'n'roll in the '00s.  Ohs?  Aughts?  Naughts?  I still haven't figured out how to pronounce the last decade.  The best comparison is with the Cars, a band that two decades earlier had plundered Kraftwerk, Bowie, and Roxy for a streamlined, radio-for-ready commercialized New Wave distillation, with a debut album rockin' for hooks where nearly every cut sounded like a potential hit single.  There's not a single strike of filler on this tight 11-song, 36 minute longplayer, and if it all sounds the same, so what?

It's not a monotonous sound; they vary the mid-tempos enough to keep things lively.  Bouncily skipping rhythms, alternately bubbling and probing bass lines, choppy little guitar lines, vocals distorted through a filter for no discernible reason.  Not that it matters, since what I can make of the lyrics they aren't important, anyway.  I still couldn't identify a member of the Strokes in a police lineup, except for the one who started starring as the main bro in that TV show Entourage after the band broke up, and that doesn't matter, either; it's garage rock, who cares if none of the players are virtuosos and the songwriting is somewhat anonymous?  Anyway, screw the "Cars if they'd been into Wire's Pink Flag instead of Kraftwerk" comparisons, you know what this reminds me of?   Generation X, that's who.  You know, Billy Idol's old punk band?  Clean but punky guitars, punchy glam hooks, the tight compression and slight meaninglessness of it all.  It's no masterpiece, merely 36 minutes of some of the most fun, excitingly hooky rock'n'roll to burst out of the New York fashion industry in quite some time.

Email ThisBlogThis!Share to TwitterShare to FacebookShare to Pinterest
Labels: The Strokes