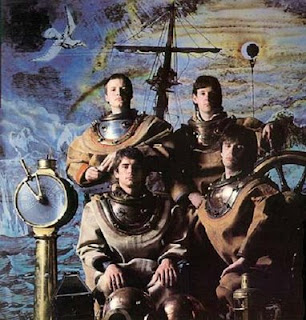 Black Sea (1980) ****1/2﻿
In hindsight, the evolution of XTC is as predictable as clockwork: this album takes one more further step away from cold New Wave and one closer step to the warmer climes of mainstream pop.  These are only half-steps, mind you; there are still plenty of White Music elements in the mix, but the herky-jerkiness is now forever confined to a respectable mid-tempo, the melodies are clearer, the song lengths are elongated, and there's even piano (not a synth!) on the opening track.  It's not as if the high points are all that much higher than the high points on their other albums; no, this is their best album for the simple mathematical reason that cut for cut, it's their most consistent.  Oh sure, "Love At First Sight" is as shallow as its title, "Living Through Another Cuba" annoyance factor is only partially redeemed by its (cute, guys) Cuban rhythm, and "Travels in Nihilon" closes the album with nearly 7 minutes of tribal pounding in a vain attempt to conjure up a gothic atmosphere but ends up merely an extremely repetitive noise (oh well, every band is allowed their "Sister Ray" failed experimentation).  Once again, Colin Moulding pens the A-side, the not exactly metaphoric "Generals and Majors", but Andy Partridge regains the reins and pens all but a couple of the rest, "Sgt. Rock" being the other obvious choice for a single.  Once again, the record company screw with the track order by inserting three bonus tracks (all B-sides) smack in the middle of the original album.  But never matter, as "Smokeless Zone" doesn't sound like it deserved to be buried on a b-side; "Don't Lose Your Temper," is a throwaway but only a 2 1/2 minute one, and "The Somnambulist", which lives up to its title (not entirely unpleasantly), at least provides a breather between pounding rockers.  Ah, they mixed those fat drums way up in the mix, didn't they?  And I haven't mentioned the lyrics yet: subjects include the Cold War, middle-class hypocrisy, militarism, the difficulty of language to communicate thought and feeling, the history of London's architecture, the slavery of modern man to units of monetary value, the way girls make you feel like a rocket that glows, and the difficulty of teenage boys raised on war hero comic books in dealing with those girls.