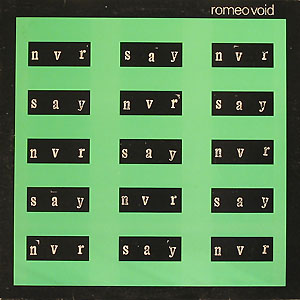 "I might like you better if we slept together."  Remember that line?  Romeo Void are remembered today, if at all, as a novelty one-hit wonder, and while it's true that "Never Say Never," is the most memorable song on this four-song, Ric Ocasek produced EP, they were an interesting band worthy of more than such a brush off.  Taking their name from a line in a magazine column about how a single girl in San Francisco can't get laid, Romeo Void write modern love songs that, true to their moniker concern more often than not the absence of romance.  The title track became their lone Top 40 hit, but their career was derailed by MTV, ironically enough for New Wavers given exposure by the medium,  The video revealed that the husky voice intoning the sexually aggressive lyrics was Deborah Iyall, an overweight Native American who was several stone too heavy for photogenic stardom.  Alas, as the single, built on an insistent tribal drumbeat (wish I could credit her Native heritage, but inspiration was more likely Adam & the Ants), with wailing atonal sax interjecting punctuations to Ayall's fervent sing-speak vocals, was one of the early '80s most compelling.  Sounding like a more pitch-controlled Exene Cervenka, frontperson Iyall is the centerpiece of the band's dark beatnik brew.  "In the Dark," is almost as good, the melodic lines slinking saxily as Iyall's vocals moan and tremble paranoically about dusky city nights.  Flip the cassette over (it was the '80s; vinyl was dying and CDs hadn't been invented yet - tapes were the medium most real people listened to their music on) and you get a pair of B-sides, "Present Tense," and "Not Safe", which feature more tribal rhythms, saxophone wailing, and dark paranoia.  I wish I could say more about them, but they're, you know, B-sides - not bad but not terribly memorable.  Why are unattractive women usually the most sexually aggressive?  No great mystery there, ugly girls sort of have to be to get male attention, don't they?  Do you really think a beautiful woman would need to sing a song full of such dire sexual frustration as "Never Say Never"?  I might like you better if we slept together.  I said might.