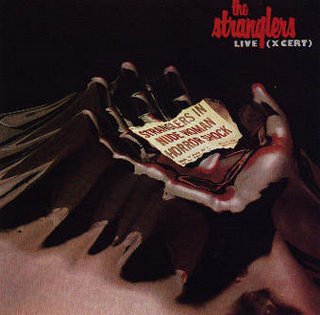 Did someone say, "Wanker"?
Live (X-Cert) (1979) ****
As it says, it's a live album.  Twelve tracks on the original LP, seven more added as bonus tracks to the CD for a grand total of nineteen.  Songs are nearly equally drawn from the first three albums and singles from the same era.  ﻿These must have been good nights, as the songs sound not significantly different from the studio versions, only rougher, faster, more agressive, less polished - in other words, a live album.  What you don't get are the visuals so crucial to the live Stranglers experience at this point in history.  That means no strippers gyrating topless to the strains of "Nice 'N Sleazy".  Or, for the ladies in the audience, the sight of Jean-Jacques Burnel pulling down his pants to join in the nude and rude fun.  I could insert a joke here, but I just finished my lengthy Black and White review and am tired, so I'll content myself with just stating the facts.  You also miss out on the spitting, that gobbing of the fans that so upset a young Simon Cowell.  You can't really package spit.  Much less preserve it for three decades.  The Stranglers were very anti-gobbing, BTW, a stance that Hugh Cornwell makes forcefully clear.  His between the songs banter is mildly amusing sometimes, not really that dumb or offensive or interesting.  Not much to say about old Hugh.  Not much else to say about this album.  It's a live album.  You can only review a live album in so many ways when you've already reviewed all the songs on the studio albums.  It works fine as a greatest hits/introduction to the band, which is why it gets four stars, and at nineteen songs, it's quite the bang for your buck.  They don't use bucks in England.  They use pounds.  The Stranglers never made it past first base in America.  Zero hits.  First four albums were only released as imports in the U.S., I think.  So I should have said something like 'power for your pounds'.  Which sounds stupid, but hey, it's the best I could do in the thirty seconds I spent thinking about it.
﻿

Email ThisBlogThis!Share to TwitterShare to FacebookShare to Pinterest
Labels: The Stranglers