Genesis - The Lamb Dies Down on Broadway 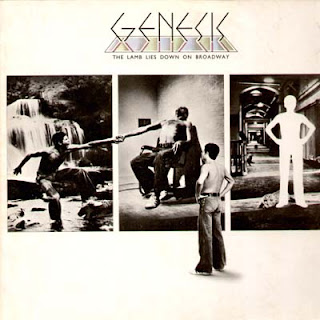 The Lamb Dies on Broadway (1974):  A two-disc rock opera that seems to drag on for hours, this one's analogous to Pink Floyd's The Wall in that there's a solid, perhaps even great, single album overextended into double LP length.  Paradoxically for Genesis' lengthiest platter yet, the song lengths aren't up but shortened into manageable 4 to 5 minute pop songs, for the most part – only two songs stretch out for a mere 8 minutes!  In fact, practically the entire first disc is entertaining all the way through, without any truly wretched songs and only a few rough spots – collectively, the finest single disc of music collected on a Genesis album yet.  The second disc suffers a running order that sets pop songs next to ugly instrumental experimental tracks that go nowhere and are sometimes as acutely painful to listen to as a Cabaret Voltaire found-sound piece ("The Waiting Room").  This also marks a major shift in the band's musical direction:  as the "plot" (hint: there is none) of this alleged showbiz musical revolves around a teenage Puerto Rican gang member in the Big Crapple, Genesis abandon the eccentric village green Englishness of their previous five records entirely.  The band sounds harder, tighter, more direct, and more 'Americanized'; in short, like a totally different band.  They're able to rock out convincingly for the first time ("Back in NYC", "It"), and even manage to come up with at least one wonderful, bouncy pop tune, "Counting Out Time," in which our hero flubs his first date with a real live girl because he learnt all his moves with women from reading pornography.   Have I mentioned yet how a certain theme of bourgeois Anglo-Saxon repressed sexuality runs throughout some of Gabriel's early lyrics?  "The Lamia" tells the tale of the protagonist's flesh being devoured by nymphs in a bizarrely Dionysian orgy, which informs me way too much about Peter Gabriel's sexual fantasies for comfort – just close your eyes to the lyrics and concentrate on the gorgeous melody.  Actually, "The Lamia" may be the strongest song on the album; it introduces a creepy goth element that adds extra potency to the already intriguing Genesis brew.  If you want to try to attempt to discern a plot to this lyrically incoherent mish-mash of acid-drenched nightmare imagery, Disc One takes place aboveground in the daylight, while Disc Two feels like Rael has delved underground the New York sewers at night, with a weird, creepily gothic atmosphere to the proceedings, Banks' organs following what feel like almost medieval chord changes.  In sum, despite the inconsistencies one should expect from a sprawling double album, there's enough good to great material to make it the band's best, and the one I reach for on the shelf when I'm in the mood for Genesis.  ****
Posted by cnoise at 8:02 PM

Email ThisBlogThis!Share to TwitterShare to FacebookShare to Pinterest
Labels: Genesis