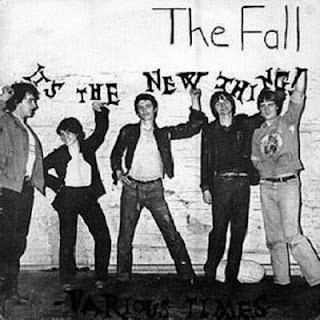 The Wonderful and Frightening World of the Fall


My first exposure to the Fall was purchasing a cassette copy of “This Nation’s Saving Grace” back when I was in either high school or college (memory isn’t exactly clear as to exactly when), and after subjecting myself to a full listen all the way to the excruciating end, a mixture of bafflement and head-scratching repulsion. Memory is precisely clear on my feelings toward what sounded like an unappealing noise of half-baked riffs and beats haphazardly slopped together into so-called “songs” that barely cohered, all with some weirdo who sounded like a drunken schizophrenic ranting barely comprehensible nonsense about who-the-hell-knows-what on top of it. Needless to say, it took me years later and much more listening to eventually get this band, but slowly – every so slowly – it clicked. Yeah, so a lot of their music eschews conventional pop values for an approach that’s jaggedly rhythmic and deliberately, corrosively ugly, but over time I’ve become “The Man Whose Head Expanded” and can listen to their atonal post-punk dirge’n’clang and appreciate those initially repulsive qualities as virtues. A band that bears on initial listen a passing resemblance to a set of bass/drums/guitars thrown in a cement mixer delivered in the back of a rumbling garbage truck will never win a huge audience, but for those with a bit of patience, the rewards are substantial.

One of the more obvious rewards being able to dig into a huge and remarkably consistent body of work – with nearly 30 studio albums, dozens of non-LP singles, and god knows how much live product and miscellany, you’ll never reach the end of it. You’ll never wear out the Fall like you do so many of your other favorite bands through overlistening to the same handful of albums and songs, because there’s always something new to hear. I’m only familiar with about half of it, myself – mostly the early ’77-’82 Rough Trade era (raw industrial punk), somewhat less enamored of the ’83-’89 Brix era (poppier garage indie rock), and lost track in the ‘90s (I have heard a couple of their post-rave dance albums, but only just barely). But they came roaring back with loud guitars for a surprising ‘00s renaissance – in fact, “The Real New Fall LP (formerly Country on the Click)” which came out in 2003, ranks as one of their very best (perhaps THE best?), and how many performers can boast that nearly 3 decades into their career? Obviously with such a vast catalogue knowing where to begin is going to be extremely daunting. The recent “50,000 Fall Fans Can’t Be Wrong” double CD comp is by far the most easily recommended starting point. As far as albums go, their debut “Live at the Witch Trials” is my favorite, particularly since the reissue appends as bonus tracks the entirety of “The Early Years 1977-79” singles/rarities comp. And if you want to throw heed to caution and just dive in, there’s the 6-CD Peel Sessions box set – legendary BBC DJ John Peel called them his favorite band and subsequently they performed more often on his show than any other.

But I think of the Fall more in terms of individual tracks. They’ve never made a perfect album and given their ramshackle, prolific approach they never will, but their rough edges are intrinsic to their charm. You can find perfectly manufactured pop in a zillion places and the Fall are the antithesis of that. A baker’s dozen of some of my favorite Fall tunes, rants, and dirges, by no means definitive though I did try to be representative of their various styles and different eras. And since due to a fanatical fan base, every single track the Fall have ever released and unreleased, studio and live, is available on YouTube, the curious can use this list as a convenient diving-off point.

1. The Classical – According to urban legend, the Fall were going to be signed to Motown (weird as that sounds, but apparently they want to sign at least one token punk band), but the deal fell through after the executives played the cassette copy of the upcoming “Hex Enduction Hour” LP and approximately one minute in immediately switched the tape off. The reason should glaringly obvious with only one listen; why Mark E. Smith decided to sing such an extremely offensive lyric is a mystery to me – who knows, maybe it’s never been explained. Oddly enough, it’s the funkiest and most grittily African-American song they ever performed (they had a two-drummer lineup for a couple of albums), with cluttery clanging guitar jarringly popping out behind the chorus throwing me against the wall and defining the sound of post-punk in a few brief seconds.

2. Mountain Energei – A late-period track, off the “Real New Fall LP”, that seasoned pop listeners can ease themselves into the wonderful and frightening world of the Fall. A Gary Glitter-ish thudding backbeat, a jangily repetitive guitar riff lifted from Iggy Pop’s “The Passenger”, a whistling synth countermelody, and Mark E. talk-singing about mortgages and rhyming Lord Byron / Dolly Parton – what’s not to like?

3. Fifteen Ways – Another late-period track that might shock old Fall fans used to their noise-rock early period: lyrically a Paul Simon nod and musically a baggy-pants 4AD nod, it may not be the great Fall tune but it shows that Mark E. can do melodic pop tunes as well as he can atonal ranting.


4. Psycho Mafia – the B-side to their first single (1978), this is bouncy pop-punk that’s as worthily catchy as anything in that cherished Buzzcocks/Jam/Undertones vein. Well, poppy if not for the deliberately abrasive tunelessness of the lead singer. The bass melody, though, that’s fantastic, and melodic as all-get-out!

5. Rebellious Jukebox – The catchiest and most anthemically pub-singalongable tune on their debut album, boasting a penetratingly ringing guitar line that the song hangs it hook and melody on.


6. L.A. – A lot of critics consider “This Nation’s Saving Grace” to be the Fall’s pinnacle, and I’m not sure if I quite agree, but it’s certainly a contender, and their most commercially successful (I think) – this darkly gothic repetitive disco groove was the closest they ever came to a hit in the U.S. And weirdly enough for a Fall song, it’s practically lyric-free, with Mark simply chanting the title from time to time while Brix moans ‘ah, ah’s in the background. Anyway, say what you will about how much Mark E. Smith resembles Gollum, Brix is smoking hot in this video,, and I do mean that in a literal sense – I like the way that woman handles a cigarette.

7. New Puritan – All right, I’ve gotten this far without tossing in a representative example of a slow, tension-building Fall dirge. It almost, just almost goes on too long, but this is the rare rock song that actually earns its 7+ minute running time, with its ferocious tribal drums and nagging guitar clang boring repetitively into your skull (and how many times have I overused the word ‘clang’ so far in these reviews?). “The conventional is now experimental / The experimental is now conventional” is as pithy a critique of post-modern aesthetics as anyone’s declaimed over throbbing post-punk.


8. An Older Lover, Etc. – As with many Fall songs, the focus is on a) the killer bass line and b) Mark E. Smith’s lyrical delivery, and feel free to reverse to that order. All other instruments and elements are played down as both a & b are mixed WAY up in the mix, and both deserve it. Mark’s rarely sounded so animatedly angry and Captain Beefheart-ian, spinning tales of boring adolescent sex from the 1960s. Or something like that. Honestly, I have no idea what the hell he’s ranting about 90% of the time.

9. Lie Dream of the Casino Soul – aka the only good song on the disastrously sloppy and under-rehearsed (yes, even by Fall standards) “Room to Live” LP (perhaps their very worst). But this one’s a keeper – the ultra-cheesy keyboard line creates a carnival atmosphere that enables the song to live up to its title and it’s got a lyric about Mark chopping his cock off.

10. City Hobgoblins – I don’t think this little novelty neo-rockabilly number was ever on an album; I think they buried it as a B-side. A shame – it’s easily one of their catchiest and instantly likeable tunes, with unusually straightforward nursery rhyme lyrics about just what the title implies. It’s a song about hobgoblins under the floorboards and in the pipes. It’s the cutest little Fall song. Whoa – did I just use “cute” and “the Fall” in the same sentence?

11. Before the Moon Falls – one of the strongest tracks off of their dark, murky second LP “Dragnet”, this low-fi groove-dirge pulsates along with tales of privation and hardship in the North (of England, that is). Musically it’s so repetitive it seems a lot longer than its 4 ½ minutes, which paradoxically is a good thing. The Fall are all about paradoxes.


12. How I Wrote Elastic Man – The Fall in rockabilly-from-hell mode again. This is a song about the guy who invented the character Plastic Man for the comic books, but Mark had to change the title to avoid copyright complications, or something like that. On a deeper level it’s about how artists are misunderstood and annoyed by their fans. This one’s pretty dinky and bouncy, just like the comic book character.

13. Totally Wired / Rowche Rumble - OK, this is cheating, these are actually two different songs, but they sound like they could be the same song, and in fact I got these two confused a few times. Musically they’re both built on basic (sub-basic, actually) rockabilly riffs that don’t change very much over the course of three or four minutes; the songs get by on an incredible rhythmic drive, instantaneously pounding from the get-go and not letting up in “Rowche Rumble” and more slowly and dramatically building up in “Totally Wired” which boasts a terrific call-and-response hook. One is anti-drugs (valium) and one is pro-drugs (caffeine), and on both Mark sounds like the t-t-t-t-totally speed-freaky nutjob he is.

Email ThisBlogThis!Share to TwitterShare to FacebookShare to Pinterest
Labels: The Fall