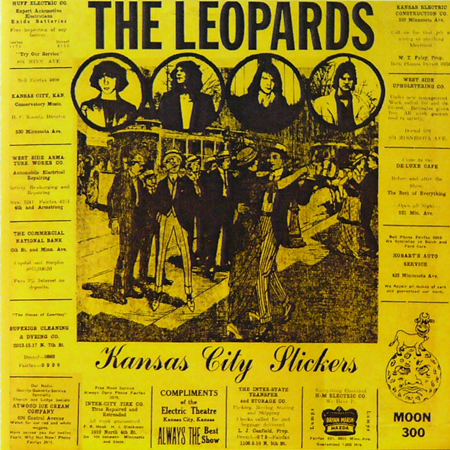 The Beatles have their Rutles, and the Stones have their Aerosmith, Black Crowes, New York Dolls, Black Keys, White Stripes, Chocolate Watchband, Keith Richards & the X-Pensive Winos, etc., etc., so you'd expect a Rutles-style imitation of the Who to pop up somewhere in middle America at some point, and this is not it.  That would be the Clash.  But they were from nowhere near Kansas.  So, Dorothy, we're not in "Oklahama, U.S.A.," anymore, we're in the Kinks Kinkdom as envisioned by a gaggle of local Midwestern musicians who, stranded in the middle of Nowheresville, KC, MO

....and proferring such extremely unfashionable Victorian pop during the year of punk (in the U.K.) and gaudy arena rock (in the U.S.), the Leopards released their debut independently and were subsequently unheard from until a decade hence.  And then, after 1987 and two indie albums, never heard from again.  The sound, as you'd expect, is pretty lo-fi and the musicians are competent semi-pros, and the album is a wonderful, lo-key delight.  The songs are unabashed rewrites of various Kinks tunes performed in Village Green era style sung with a dead-on Ray Davies vocal imitation, with subtle lifts stolen directly from certain Kinks tunes.  "Bugle Boy," sounds a wee bit close to "Tin Soldier Man," don't she; "Road to Jamaica," is the kind of faux-ska that could've slid easily onto the studio half of Everybody's in Showbiz (and would've been better than half the tunes on that platter); "Recess," likewise is superior to most of the tunes on Schoolboys in Disgrace; "'57 Chevy," - hey, another little rockin' humdinger about "Drivin'"; and we could go on all day with this, or at least 'til I'm finished with each of these 11 tracks.  None of these songs could truly be called A-level Kinks klassiks - imitation rarely competes with genius - but they do mostly reach at least B-level.  Sorta like Badfinger to the Beatles, y'grok?

Actually, the Kinks have inspired scores of bands over the decades, but there are two considerations that make this particular imitation special.  Firstly, rarely are Kinks imitations this blunt.  Even the likes of Blur don't sound like the Kinks, keeping matters technologically up-to-date.  These tracks sound old-timey as if they lept directly off Muswell Hillbillies, which must've been quite the amusing retro-twist in 1977.  You keep your smart modern prog-rockers and fancy studio equipment, gimme my Victrola gramaphone.  Gander at that LP cover - give you a sense what time-bound atmosphere they're aiming for?  Secondly, very few bands aim for this particular era of the Kinks when they're on the Davies Bros. bandwagon.  Generally speaking, your average Billy Childish or Jack White cranks up the amps and sets the controls for the heart of 1965.  Not 1925.  Which was clearly where these fellas' hearts were.  Oh well, as the old tune goes, this is my street, and I'm never gonna leave it, 'cuz this is where I belong.....