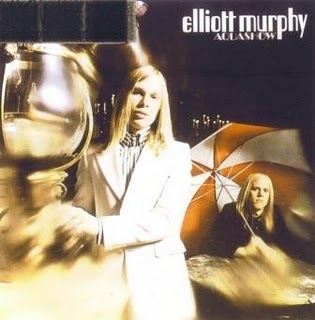 Aquashow (1973) ****1/2
Of all the New Dylans the early '70s puked up, Elliott Murphy's debut comes the closest to actually sounding like Blonde on Blonde.  ﻿ His band even includes Highway 61 Revisited's keyboardist, Frank Owens, who pursues that thin, wild mercury sound with a roller-rink organ roll more intensely purist than the original artifact (ex-Byrds Gene Parsons is the other famous musician in the band, but not so's you'd notice, as his licks owe more to mathematical, choppy Hawks-era Robbie Robertson than Byrdsy jangle).  The imitation is so perfect it would amount to Zimmerman's Rutles if Murphy's songwriting skills weren't up to meet the audacious challenge of taking on '66 Dylan at his own game.  Mouse & the Traps it ain't.  The first five or six songs are wonderful, thrillingly perfect marriages of singer-songwriterism and carefully under-rehearsed rock'n'roll (roll it does), despite their obvious derivativeness: Murphy was to Dylan what the New York Dolls were to the Stones and Jonathan Richman was to the Velvet Underground, two other highly derivative but classic debutantes of 1973.  Murphy possesses a thin, tinny tenor that well suits the thin, tinny music, like a Roger McGuinn trying to cop a Lou Reed street tough attitude:  a fresh out of college rich kid (which he was) whose streetwise pose ill disguises his essentially innocent nice guy-ness.  Murphy's the flip side of Springsteen, another New Dylan who released his debut the same year:  Long Island instead of New Jersey, upper-middle-class not blue-collar (the title is a reference to the real Aquashow his father owned), literate and sensitive instead of macho sensitive (Murphy does seem to have read all of F. Scott Fitzgerald's books, and even named his second album Lost Generation).
"Last of the Rock Stars," roars out of the gate, spotting the King rolling by in a limosuine fogged up in purple haze, and while the irony of "How's the Family," is laid on too thick, it's a lovely tune, and it's not as if Dylan's own social commentary wasn't too obvious from time to time, no?  (Such as the entire wretched The Times They Are A'Changing album.)  "Hanging Out," is a breezily upbeat poppy (not pop) number with  naggingly catchy na-na-na-na backing vocals on the chorus, a whirlwind through Max's Kansas City era Lower East Side.  "Hometown," to my ears is the album's highlight, a hauntingly evocative track full of striking, deathly images and glimpses of larger stories.  It's no coincidence that Murphy published a novel and a couple of collections of short stories later in his life.  "Graveyard Scrapbook," and "Poise'n Pen," choogle on nicely, the latter edging closer to Springsteen-ian bombast.
And it's here where the album jumps the shark, if only for a few tracks.  Being 24 is no excuse for penning such a ridiculous lyric as, "Marilyn Monroe died for our sins," much less building an entire song around such a chorus. The music itself is draggy and dull, as well.  Then comes "White Middle Class Blues," three minutes of lyrically clever but shallow boogie blooze that unpleasantly recalls the generic rock'n'rolly blues numbers that Dylan littered too much of Blonde on Blonde with.  Murphy had to pull at least one of those for imitation's authenticity, I suppose.  "Like a Crystal Microphone," is pleasant but boring and insubstantial, the song you're guaranteed most likely to not remember from this album.  But just as you're ready to write the final stretch of the album off as a waste, comes on the sweetly pop melodicism of "Don't Go Away".  So not all of the ten songs are good - let's be honest, Bob's batting average on his classic mid-'60s triumphs wasn't any better.  Anyway, perhaps I've laid the comparisons on too thick; as you might discern from this review, Murphy has his own unique voice, and hey, everybody has influences.  That's no crime.  The real crime would be bad music, and this isn't.
﻿