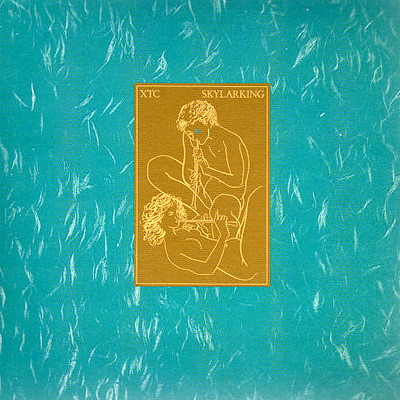 Skylarking (1986) ****
It's not quite the masterpiece proclaimed, but it's easily the 5th best XTC album (after the classic '79-'82 trio and the Dukes side project).  Washed away completely are any New Wave jittery affectations; partial credit may go to producer Todd Rundgren smoothing away the dissonant edges into easy-listening pop, but XTC had been attempting to go pastoral since Mummer.﻿  The result is the most cohesive album XTC have ever made; intended as a song-cycle tracing the pattern of springtime birthjoys to the fading embers of death, magically Partridge and Moulding tie the concept all together with a collection of tunes that rarely falters - an achievement for such a previously jarringly inconsistent band.  Their previous albums often were rough rides in their restless shiftings of moods, genres, and up/down song quality, which wasn't necessarily a bad thing; here, by contrast, the songs all flow together evenly in quality (more or less; there are highlights and lowlights) but more importantly, style of sound.  Getting the freakbeat mid-'60s affectations out of their system with the Dukes of Stratosphear, the mood of Skylarking is post-psychedelic late '60s:  the Kinks' village green, the Beach Boys' Friends, Paul warbling about mother nature's son, Donovan sending a gift from a flower to Syd Barrett.
Not that it's all for the better.  Stripped down to musical basics and simply delivering straightforward, unaffected pop songs reveals some of XTC's songwriting to be a bit....well, simple, and not in a good way:  tunes like, "That's Really Super, Supergirl" can sound shockingly basic in the songwriting department this late in the band's career - childish, even, if I dare use that word.  This is not, however, a huge problem on this album (but trust me, it will be on the next one).  A song like Moulding's "Grass," may rely on more on texture than actual tuneage, but in this particular case that's no big deal - mood-setting is what it's there for, and it's clearly the winner of his four contributions, hazily evoking a roll in the picnic on a hot late summer day.  "Big Day," celebrating the great wedding, is Moulding's other standout track, but shouldn't it come before rather than after Partridge's "Earn Enough For Us," which frets over the husband's ability to support the wife and kids?   Nevertheless, it is appropriate that Moulding's morbid "Dying," should be the second to last track on the album - would be a bum note to end matters on, wouldn't it?  The conclusion then goes to Partridge's "Sacrificial Bonfire," considerably more upbeat but not exactly what I'd call UPbeat.  And how come no one ever mentions "Another Satellite"?  I have no idea what it's about or how it fits into the theme - it could be a digression lyrically for all I can tell, as it certainly is a digression musically speaking:  sounds spacey like Bowie (egads, yet another rewrite of "Major Tom"!  Ah well, this one's a good'un).
But now I have to deal with the album's big hit and most controversial track, to fans and non-fans alike.  Fans hate it because it was originally a B-side that displaced "Mermaid Smile," on the American editions and thus disrupted the thematic flow of the LP.  I can see their point, but I can't see XTC fanatics' point in writing off the song as complete rubbish because of that.  It's a classic case of fan snobbery to run down their favorite band's biggest hit simply because it's their biggest hit.  "Dear God," and not some other tune off this album, was a hit for a good reason.  Do any other tunes here, beyond "Earn Enough For Us," (which should've been a hit in a just world) scream 'hit single'?  Nope.  They mostly sound like a collection of good album tracks.  "Dear God," possesses one of the most direct and accessible melodies of XTC's career, an inventive if repetitive acoustic-then-electric Simon & Garfunkel-ish arrangement, and bitter, angry lyrics that speak to the hearts and minds of a lot of people.  There are very, very few popular songs written from an agnostic or atheistic perspective, and as far as I'm aware this is the only God-questioning as opposed to God-worshipping tune to ever actually receive substantial radio airplay.  It is the one song that XTC, if they have any song legacy at all decades down the road, are certain to be remembered for, for that reason alone, strictly musical worth aside for a moment.