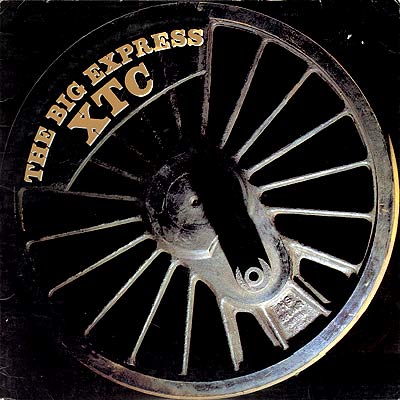 The Big Express (1984) ***
Whoa-hoah-hoah Nelly, talk about OVERPRODUCED, and I don't toss that term around lightly:  this may, ladies (I'm sure there is at least one member of the female species who reads this music geek's blog) and gentlemen, constitute - without overstatement - the most insanely overproduced outpouring of musical product ever released.  By overproduced I don't just mean glossy (which it is).  I don't just mean LOUD (WHICH IT DAMN WELL IS, THIS ALBUM IS THE MUSICAL EQUIVALENT OF TYPING AN ENTIRE PARAGRAPH IN ALL CAPS).  I don't just mean overranged (which the busy-busy-busy-busy-busy-clockwork working overtime tunes most certainly are).  I don't just mean headache-inducing (which it....oh, you get the picture).  WHALLOP!  WHALLOP!  WHALLOP!  THAT IS WHAT THIS ALBUM FEELS LIKE.  YOUR HEAD IS BEING INCESSANTLY POUNDED UPON BY DRUMS MIXED WAY, WAY, WAY UP IN THE MIX (NOTABLY THE WORST SONG OF ALL TIME [OK, ARGUABLE, BUT WORST XTC SONG OF ALL TIME?  INARGUABLE] "SHAKE YOU DONKEY UP" WHICH SOUNDS AS RETARDED AS YOU'D EXPECT FROM THE TITLE).  IN FACT, EVERY INSTRUMENT IS MIXED WAY, WAY UP HIGH, FROM THE OPENING POUNDING PIANO CHORDS OF "WAKE UP," WHICH COMPETE WITH COLIN MOULDING'S MULTI-TRACKED, BEERILY SHOUTED VOCALS.
Ok, enough of this nonsense, I'll shut the caps lock key off for the rest of this review, but perhaps that opening paragraph might give you a sense of how annoying listening to this album can feel like.  Studio hideboundness was obviously not doing Partridge and Moulding any favours, as this album and Mummer suffer from what feels like a pair of grown man-children run amok constructing train sets in Santa's elves' worshop.  The actual sound of Mummer, obtuse as the tunes were, was actually pleasanter than this over-the-top fruitcake; however, this album's considerably better, as the tunes are more direct and poppily accessible and just plain good.  However....however, however, however, getting past the production is a huge, huge, huge hurdle  Partridge's lunatic excess gets so excessive that he almost buries the hooks and melodies by parodoxically overemphasizing the hooks and melodies:  the aural equivalent of shoving a rich, creamy chocolate-with-sprinkles cake in your face like a clown.  Sure, cake is sinfully delicious, but not particularly enjoyable when it's rammed in your face.  Words cannot express my relief when track five rolls around, "This World Over," a (relatively) low-key adult contemporary ballad concerning the aftermath of nuclear armeggedon.  If that sounds like the sort of thing that a solo Sting might pull, well, you'd be right - it does sound like a leftover from Dream of the Blue Ghost in the Synchronicity Machine Which is Nothing Like the Sun.  Then comes more pounding whallop! in "The Everyday Story of Smalltown," which is Ray Davies in lyrical outlook and feel if not precise presentation (garish, garish, garish, and damn aren't those drums mixed way too high?), and along with "This World Over," you've got the two genuinely great, prime XTC tracks on this album paired right next to each other.  Then they have to ruin the winning streak by following that up with "Liarbird," a go-nothing song with worthless vocals.  There's something so nails-on-chalkboard about this tune that I can't quite put my finger on.  Sifting through the dross and drivel, there remain three pretty good songs:  "All You Pretty Girls," the musical excesses of which are salvaged by a brawnily puffing chorus;  the flutteringly surging piano pop, "You're the Wish I Never Had," which structurally reminds me of the Pretty Things' "Walking in My Dreams,"; and Moulding's Kinks-gone-lounge jazz "I Remember the Sun."  Of the three bonus tracks, only one is worth salvaging:  Moulding's "Washaway," cutely pounding pianner-poppy little thing; of the other two bonuses, "Red Brick Dream," is a pretty nothing, and "Blue Overall," bluesily grating chalk-on-cheese.
﻿