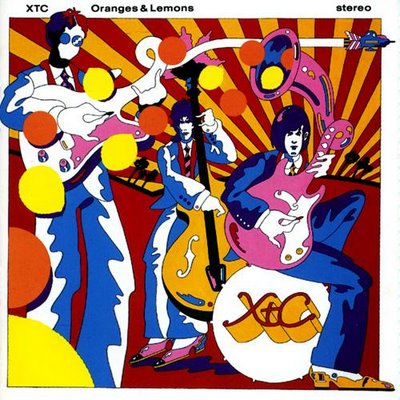 Oranges and Lemons (1989)﻿ ***
In which XTC give full way into the sissy pop band always lurking inside.  One glance at the cover should tell you what this is:  a Saturday morning children's cartoon version of '60s "psychedelic" pop.  This is Chips From a Chocolate Fireball performed with a straight face, and that's only half the problem:  the other halves are the glossy late '80s production and the 15-song hour-long length (making it a small footnote in history by being one of the first double-LPs that was issued as a single CD/cassette).  OK, that's 150%, which adds up to excessive, but so does this CD.  (Actually, I've had it on cassette for years, but only listened to it for the first time in a decade this past week.)  The problems are apparent from the first track, "Garden of Earthly Delights," which hearkens unpleasantly back to Big Express territory with its ludicrous rococo excess attempting its best to hide whatever tune there may be underneath massive layers of over-arrangement.  Eventually, a bright and simple tune does make itself very clear and bright, but even then, you're so blindsided by the horns and pounding drums that all you'll remember is the overblown arrangement.  Fortunately, the rest of the album isn't (for the most part) within that style; in fact, the next two tracks are the album's clear highlights.  Moulding chips in with his A-side for the B-level sidekick he is, "King for a Day," which is very pleasant, easy-listening pop-rock that superficially resembles Tears for Fears' "Everybody Wants to Rule the World," (not that's a bad thing, mind), which was the non-hit followup to the album's big hit song (and only U.S. Top 40 entry) "Mayor of Simpleton," a song about a retarded person trying to get into some girl's pants.  It's an extremely catchy slice of pop classica, but I have to take issue with the vile sentiments.  Andy is arguing that he deserves to get laid even though he's ugly (ever taken a good look at him?) and stupid.  I'm afraid that I'm going to have to introduce Mr. Partridge to the concept of Darwinian selection.  Contrary to the song's sentiments, stupidity is never a turn-on.  The protagonist of the song lacks brains, charm, and good looks - so why should any woman want to be with him when there are so many better choices available?  Does Andy have anything to offer?  Oh, he claims that his love is so strong that she should ignore the fact that he's a moron, but that's never been a convincing argument in the history of courtship.  If intensity of feeling were an argument for romance, stalkers would make the best lovers.  Let's face it, some people just don't deserve to breed.  I know this sounds harsh, but have you taken the bus lately?  Our society is being overrun by dumb, trashy, not even particularly good looking people breeding like rabbits.  These people do not need to be encouraged.  Thus, "Mayor of Simpleton," despite its catchiness, ranks as possibly the most morally irresponsible song ever written.
After track #3 the album grows very inconsistent, starting with track #4, the painfully obvious (and I do mean pain) "Here Comes President Kill Again," which does nothing as a song and is the first entry in this album's song cycle of overwrought, simplistic political posturing.  I know that sort of thing was trendy in the late '80s and early '90s, but c'mon, XTC are no Midnight Oil, or even R.E.M.  It's not so bad when essaying lovely trifles as "The Loving," but not when he's getting po-faced and serious on "Scarecrow People," - is that a metaphor?  Whoah, could that be a metaphor for something?  Speaking of idiotic metaphors, "Pink Thing," is universally regarded as the album's lowest low point, and I'm going to quite predictably agree.  It's about a dick.  And it's not even funny - that's the real crime.  Anyway, to save this from being a lengthy track by track review of a 15 song LP, let me conclude by noting that the closer, "Chalkhills and Children," is a semi-haunting recreation of Surf's Up-era Beach Boys and that most of the good material is concentrated on the first side (as conventionally expected).  There are some crappy lounge-jazzy things on Side Two and some Garbage Pail Kids (remember the '80s!) children's music in "Hold Me Daddy," that sounds like a senile David Byrne.  I would counter with the cliche that this is one good LP stretched out to a double LP length, except that there are 15 tracks and only about 5 actually constitute good music that I might want to hear again, so that only makes for 1/3.  A good EP, then.  If you bothered to read my review, you know exactly which tracks to download for the iPod era.
Posted by cnoise at 5:26 PM