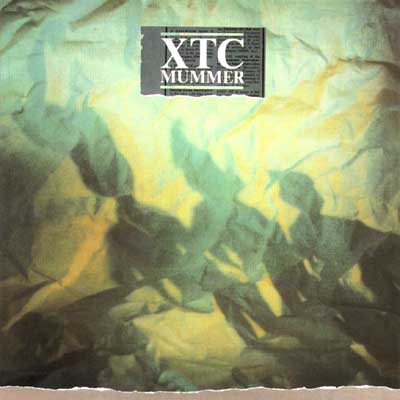 Mummer (1983) **1/2
Around this point in XTC's history, Andy Partridge suffered a nervous breakdown onstage and the band gave up touring entirely.  I suspect the retreat into the insular studio is to blame for this cluttered mess of an album, and clutter is the precise word:  the songs - I don't know even where to begin describing half of these tunes, they are so intricate and stuffed full of interesting ideas that in general go nowhere.  Overcleverness had threatened to topple over the band's innate tunefulness on previous encounters, and here XTC's eccentricities completely overtake them:  the songs do not behave as proper pop songs, but announce themselves as meticulously constructed lego-block sculptures that scream, "Look at how much time, effort, and thought we put into building these Towers of Babylon!"  And as such, it's bloody difficult to find the melodic core of most of these tunes, getting so lost in the distractions of the rococo shuffle.  And unlike English Settlement, which likewise proved initially difficult to absorb, repeated listens don't uncover that many frosty nougats hidden within.﻿  It doesn't help that the mood intended is pastoral, which translates as mellow and energy-drained; only the hectoring closer, "Funk Pop a Roll," which feels totally out of place, displays any rock'n'roll, and it's the worst track on the platter.  Sure, there are a handful of decent songs, but only the sprightly acoustic-based jig, "Love on a Farmboy's Wages," and the big-beat cello-pop "Great Fire," are up to XTC's usual standards.  Two more songs are decently passable:  the shufflingly loungey "Ladybird," is a pleasant trifle, and the WWI eulogy, "In Loving Memory of a Name," barrelhouses rollickingly enough to provide a sliver of amusement.  And that's pretty much all that's salvageable:  tracks like "Human Alchemy," and "Deliver Us From the Elements," seem fussily overcomplicated in their arrangements as if to overcompensate for their complete lack of melodic hooks, and are as aren't-we-clever-lads headache inducing as anything in the XTC catalogue.  And for a band whose entire career has been marred by ain't-we-clever smarminess, that's saying a mouthful.  Lower in my estimation is actually one of the rare simple tunes, Moulding's "Wonderland," that is so cheesily '80s produced that it sounds like the bleeding Style Council.  Fans and critics agree that this is one of the band's lowpoints, and who am I to disagree?  Back when I was fifteen, I took a chance on the band and plunked down two dollars for a cassette copy as my intro to XTC.  It burned me on the band badly and took me years to recover.
Oh yes, there are six bonus tracks, none of which are essential, and in fact, only two of which are really worth your time.  "Frost Circus," lives up to the title, Christmas-y carnival instrumental froth.  "Jump," isn't nearly as winsome as Van Halen's but it's another sprightly little acoustic pop number that warms the cockles.  "Toys," is of a piece with the album proper, far too clever for its own fussily overrangement archness.  "Gold," is brassily annoying, and "Procession Towards Learning Land," wasn't memorable enough for me to remember it, and "Desert Island," is actually sort of OK, more pleasant acoustic pop.  OK, that's three bonus tracks worth the time of hearing, but none amount to much more than that.